Next day, Friday, August 27 2010 we woke up in Swiss-Italian Airolo. During breakfast we met a Swiss couple, who traveled on the rail, because it was “free” for them. They pay over 3000 CHF per year each to use the rial system for everyday commute.  So they decided to cross Switzerland without a car – rails only.  She was originally from New York, and he was native Swiss and worked at some point back in 1990s at on factory in Krasnodar.  World is coming together at the breakfast table.

The main attraction here is St. Gotthard Pass (over 2000m high) and we planned an extensive walk around all the lakes formed on the pass plateau.  Let me list some naming conventions for this post. 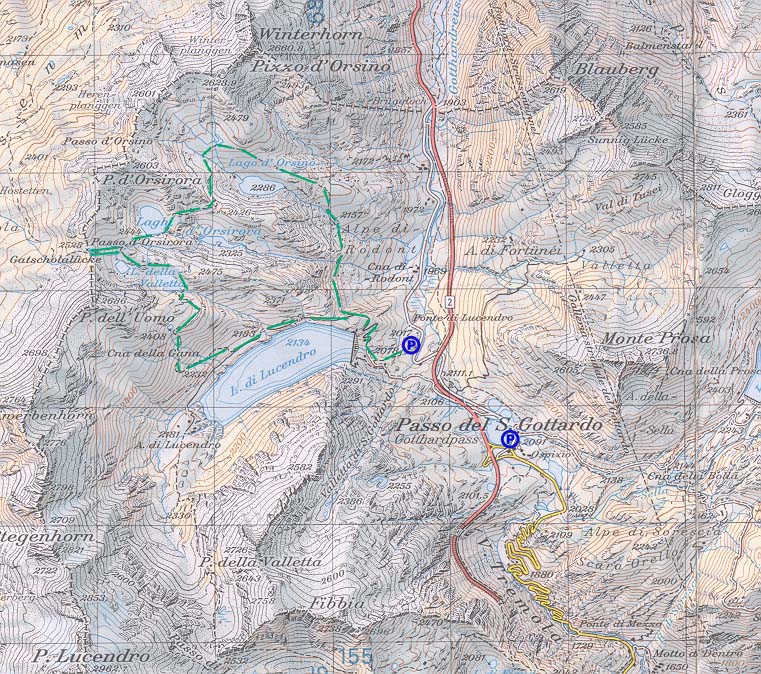 Right after the breakfast the weather turned miserable.  Rain and fog set in.  We ignored the weather, and begin to climb up about 11km from Airolo to St. Gotthard Pass on the car.  Pass itself is a few buildings jointly named Ospizio located on a small lake – Lago della Piazza.  There is a museum, several restaurants, a hotel, and even a chapel.  Parking is free.

While it was raining and wind was hauling, we had time to look around, to take some pictures and really study a peculiar Suvorov’s monument right here on the hill.

This is a  very unusual sculpture.  Extremely realistic. And extremely out of place, exactly like the whole  Russian Swiss campaign of 1799. Back then hearts and minds of Swiss were against revolutionary Napoleon, who captured part of Swiss Cantons, and they were with Russian army sent by Emperor Pavel I to assist Austrians.  And Suvorov wanted to meet Napoleon on the final battl and  multiply his glory in a very last military action.  He was almost 70 years old.

We spend 2 or 3 hours here at the pass, we eat our lunch, and the weather began to turn to the better. Sun was coming out now. What a timing! Right around 13:30 we were ready, and it still wasn’t too late to start and finish the entire trip as planned. We parked our car next to an entrance to a underground bunker, where civilians (arrived on a bus) were trained for their civil defense duties. This parking is about 100m bellow water level in lake Lucendro, right under the dumb. 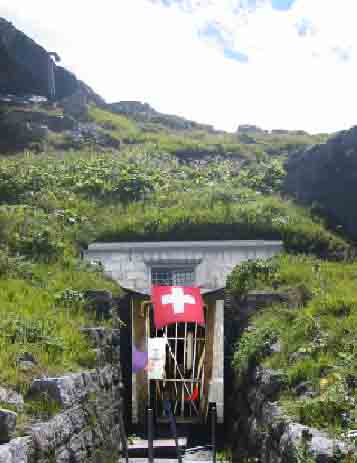 There is no forest or trees out here, so 100% of a time you can see 360° around you and enjoy the landscape.  First, you going under the protective wall of the dumb.  Area appears to be heavily fortified with underground defense system.  Here and there are secret entrances to the underground world and only if we had more time to spare.  And may be some flash lights. But we did not.

You now begin to climb on a very narrow, but never-the-less auto-road.  And the St. Gotthard pass begins to reappear in the distance. For several more hours it will remain visible and intriguing object on the horizon.  A hardly noticeable path leaves the road down less that half an hour into the trip, and you are now on an actual trail. 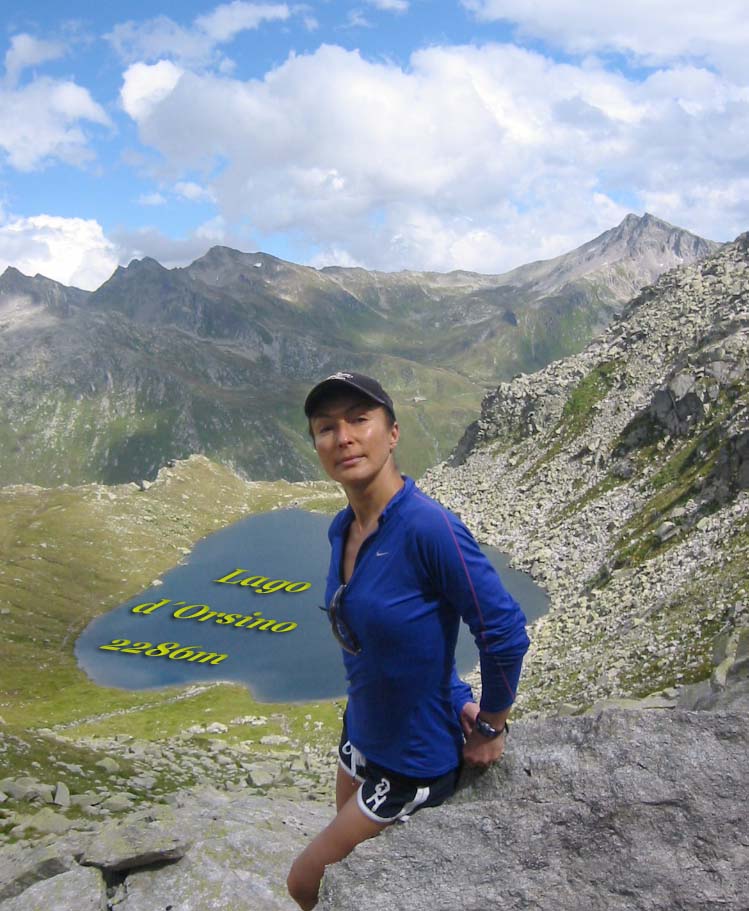 The path continues on the slope of a mountain, but it is extremely flat and straight, so you can see6 where you going almost half a mile ahead.  Little by little path begins to climb up and you start to encounter several cows or bulls roaming in a makeshift areas surrounded by barely visible fence.  Huge near-barren slopes can support an appetite for only a few cattle.  And you get to hear the famous Swiss chatter of the cow bells.

First lake – Lago d’Orsino (2286m) – is about 250m higher than your starting point, but it feels higher, because of some ups and downs, and because to see the lake you need to climb much higher to look down at it crater.  You climb a little bit more (2388m) and you reach the turning point of you journey.  Only now St. Gotthard pass disappears from the horizon, and you can take a rest near a very small unnamed body of water.  That is most north-west point of your from trip.  After that trail begins  to return back of the second leg of the round trip.  But at this point you only walked third of a 10km circle.

Path circles around the lake and you no longer see or can guess, where it will take you next.  You expect next lake to appear on the right, but it appears on the left.  You expect to  start going down, but stubborn mountains ahead force you to continue to climb up.  Series of next lakes called Laghi d’ Orsirora (2444m). They are smaller, but you anticipate them more.  At each next lake you hope to see a pointer to the pass to the the next Canton – Uri, the highest point of the trip, and a kind of a half way mark. 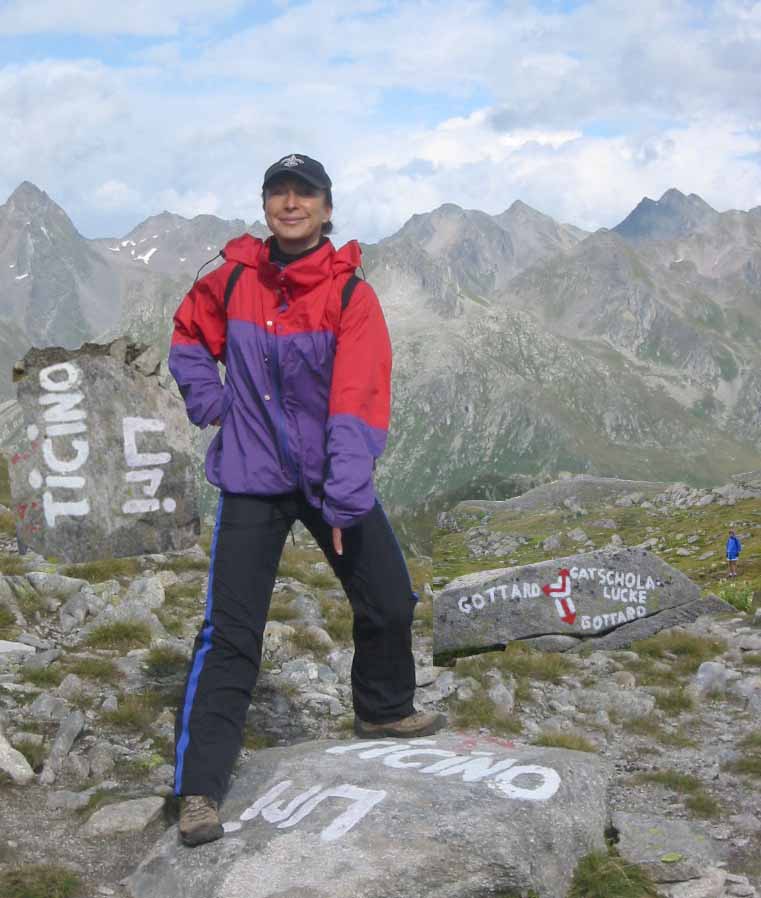 If you have energy and weather is cooperating you can take a 300m detour to the Passo d’Orsirora (German name – Gatscholalücke – 2528m).  That is a gateway between Ticino and Uri (16:50).  From there you can see to the other side of the mountains. You can see  an auto road makes it through the Furka pass.  If you continue further, you will cross into German-speaking Uri, but we are returning back  back into Ticino.

Sun and rain and wind made a powerful mixture that day.  They were cooking a new kind of weather.  And the rainbows were popping oi and out in front of us, but they are hard to capture on camera. 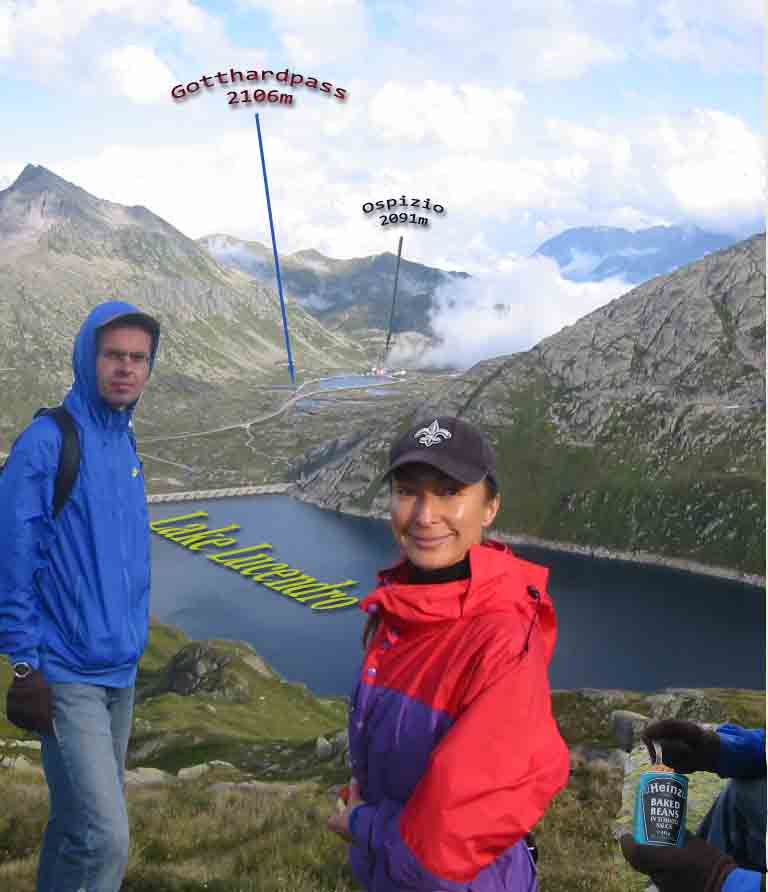 At this point I finally realized that I am hungry, and cold and ready for a break.  We made a stop on a steep slopes of the first of Laghi della Valletta (2468m) closest to the pass.  What did we have in our bags? – Heinz Baked Beans in Tomato Sauce.  We found that yogurt is also a good companion, but the packaging will break in a rucksack, and it will break not once, but twice.  Cans on the other hand are very reliable and rucksack friendly.

Very soon we climb one last wall of wet stones and on the other side discovered a first look Passo del San Gottardo (17:38) and the Lake Lucendro (17:46) some 300 meters bellow.  It seemed that the journey was over, but in reality it is 3.5 more kilometers to the parking lot.  And it one of the more fantastic portions of the trip.  So, all this time was a build up to a final crescendo.  “Crescendo on a Lake Lucendro”! 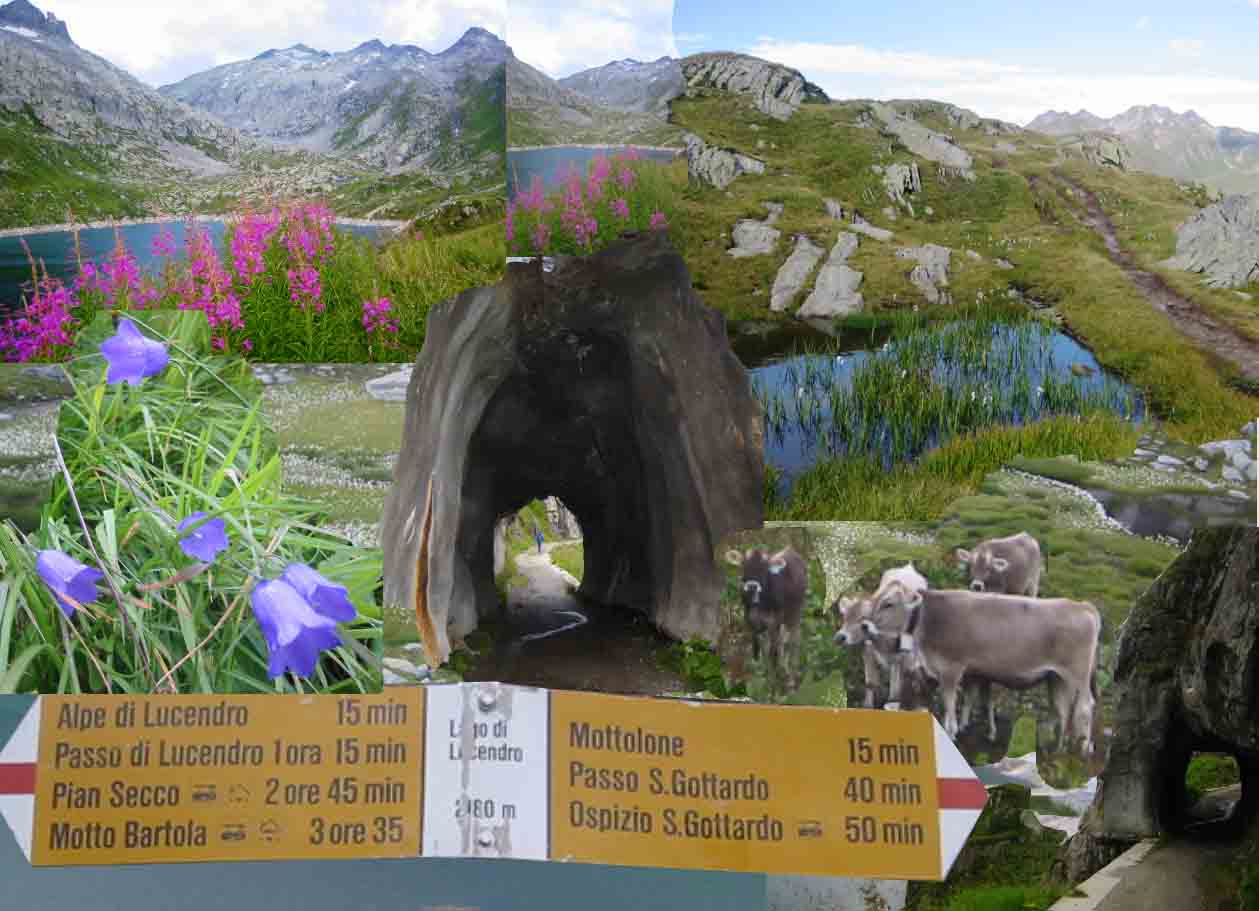 Path begins to sway away from your final destination.  It fills that your are going into a wrong direction.   It is a steep downhill at this point.  I made a mistake to invent a shortcut for myself, while Lira continued on a marked path.  Do not do it. It is too steep, to wet, to dangerous and blocked with electrocuted fences.  We’ve met down bellow at the same moment, only I was all wet and shaken, and Lira was all smiles and ready to enjoy the most beautiful last portion of the walk.

The road back along the high country 50m above lake Lucendro is flat, comfortable and memorable.  Leave plenty of energy and camera battery power for that portion.  Think even to reverse the direction and visit this part of the circle first.  Photograph a small tunnel here, photograph the flowers, the water, the dumb, the surrounding mountains.

We returned to the car few minutes before 7PM.  The whole circle took us 5 hours. We had a late supper next to Airolo station (via Stazione). We sat outside at Ristorante Cristallina. For the first time in ages I ordered a pizza (Prosciutto 14CHF), and we had to return it because it was burned.  Now problem.  The new one was good, and I finished it all (21:20).

Next day – Thursday, August 26, 2010 – it was time to leave Bellagio and Italy and return to Switzerland.  First, we had to drive using the same narrow and picturesque road along lake Come and enter Switzerland through Chiasso.  Just a second ago we were driving on a busy […]

01 Preparation for the Swiss Trip in August 2010

I started this post long before the trip to Europe.  And finishing it now in the depth ob November.  Do not linger here.  Jump right to the first day in Zurich. Use links bellow to navigate directly to your favorite days and destinations. Just look at a phenomenal rainy weather in Zurich […]

Wake up in Airolo On Saturday, August 28 we woke up in Airolo.  I had all mine and Lira’s warm clothes on me to stop the cold. I was able to delay the actual cold till September 10.   Breakfast was included, so we eat along with all the bikers, who […]