Like everything else except eternity, this story has a beginning. On a hot summer morning on August 31, 2010 at 7:45 EST in a comfort of fresh air-conditioned air, I am beginning this story, this vacation journal that shows how far Europe and America have moved apart during last 200-300 years. Have they ever been similar?

This was our sixth trip to Europe in 11 years. On August 14, 2010 we landed in Zurich. Zurich is located in German-speaking zone of Switzerland.  Switzerland did not join the Euro zone and the currency here is Swiss Franks (CHF).  Our plan was to spend a couple of days here and then venture into a circular movement around Bern – Geneva – Mont Blank – Torino – Genoa – Milan – Lake Como – Saint Gotthard Pass and back to Zurich in 2 weeks. We did the circle; and we did it in 2 weeks, but the intensity of the events was not something you can plan for. 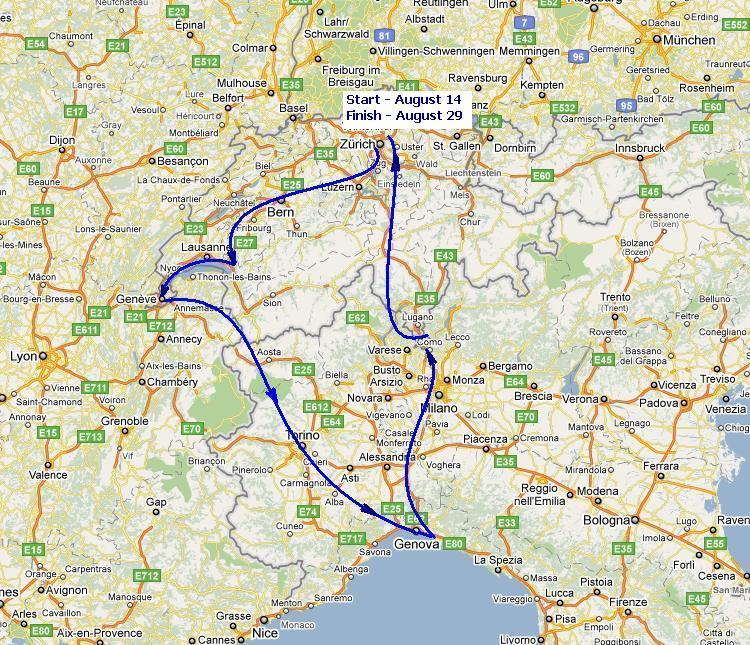 We did not have any pets or kids with us. That worked well in our favor. We also did not have any hotel reservations anywhere on the trip. It might seem a little intimidating for some travelers. But for us – a group of two – it was a manifestation of boundless vacation freedom.

We took 400 CHF from ATM right at the airport (2 crispy 200 CFH notes) , and cross the street to get our SITX rental car.  That was the only reservation, besides air tickets, that we made preliminary from Boston.  And you can’t really call it a true reservation, because we did not have to provide any credit card information.  It was more like a promise to hold a car for us.

That reservation turns out to be a smart thing.  As usual they didn’t have a promised small automatic transmission cars, one of those “Astra” or “Golf” for us, so they upgraded us to a nice automatic Mercedes; with navigation system.  On the web side they wanted 17 CHF per day for that thing.

So now we are driving from the Zurich Airport – Kloten (north-east of the city) – equipped with 2 navigation systems – built-in Mercedes one and ours – Garmin Nuvi 750 with Maps of Europe data card.  I never used a navigation system before in an unfamiliar area, so for me it was a new experience.  It feels like mute guiding blind.  I am the blind one. I am no longer need to know, where I am and where I am going.  I am being told what to do and all the turns and streets are just the grid on the map.  It is a deferent story, but several days later we found that it is better to have a general understanding of your surroundings by checking with the map.

So, the first experience with GPS in a downtown Zurich was not a success.  We tried to reach a youth hostel, but many streets were closed due to costume parade, and we just could not find the needed street.  We ended up on a dead end Hohenbühlstrasse, stopped and started to think what to do next.  Streets like these are wonderful, if you are looking for a free blue zone parking on Saturday afternoon or on Sunday.

From our treasure chest we extracted a couple of possible hotel options pre-printed in Boston.  Zurich and entire Switzerland is under reconstruction, and driving is not a pleasant experience.  However, we mange to reach Technoparkstrasse on the North-West corner of the city, and checked out Etap, Novotel and Ibis hotels.  Prices were 140, 300 and 180 CHF.  And their parking garage was extra and it was full.  And the area was extremely industrial and formal.

Finally, we drove to a South suburb of Zurich – Adliswil and decided to stay at hotel Ibis ‎ for 166 and 114 CHF for our first 2 nights in Europe.  No breakfast option turns out to be a great thing for us.  While adjusting to 6 hour leap forward, we woke up around 10AM and breakfast is usually over at this time.

As a lesson for future, it might be a good idea to a have a reservation for the first night right after arrival, when you are tired and vulnerable.  Luckily, our choice was excellent, because of plentiful hotel free parking, staff that speaks English and proximity to Zurich.

Next day Sunday, August 15 we drove back couple of miles to the city.  Zurich was quiet that day. We found several vacant parking spots on by this time favorite and hilly Hohenbühlstrasse and went for lunch to Tibits on Seefeldstrasse 2.  Here you pick whatever you want onto your plate (mostly vegetarian stuff) and pay by the weight at the counter.  Drinks and shakes are separate. At 41 CHF per KG this gets expensive fast.  We paid 64.70 CHF on MasterCard, which after conversion and fees turns out to be $64.15 – so, practically one-to-one.

Rain that we were so afraid ended by this time, and sun began to make way. On the way to old town we accidentally discovered a house, where Richard Warner lived in 1853-57.  Currently it is a Portugal Consulate on Zeltweg 13.  We also walked trough Kunsthaus.  This is a usual boxy gray complex of buildings that hosts city museum of Arts.

We knew about Zurich that it used to be Lenin’s hang out place for 1916-17, and that is where FIFA (Soccer) Headquarter located.  We never reached FIFA.  But we gave Leniniana our full attention.  There are sites and authors who track Lenin’s movements in Zurich.  We missed his apartment on the first sweep, so we reached the Rail Station (Zürich Hauptbahnhof) and asked, where to find all those places mentioned in guides.  They mapped them out on a free city map.  Here I changed my brand new 200 CHF note to buy couple of yogurts, and we went searching for some of the favorite gathering places, where Lenin talked, made speeches or just frequent for food and drink.

Friday, August 15 – Wien Next day, on Friday, August 15, we woke up in a perfect spirit.  We slept for the first time on a new European schedule.  Breakfast is included, so we ate cheeses and ham and boiled eggs, lots of coffee and tea, and diluted orange juice. […]

Tuesday, August 26 – Venezia  Next day Tuesday, August 26 we planned our day tour in opposite direction.  From our hotel across the Ponte Scalzi towards universities, academies and through Ponte de l’Academia to see Piazza San Macro and see how far we can advance in a hot Italian August […]