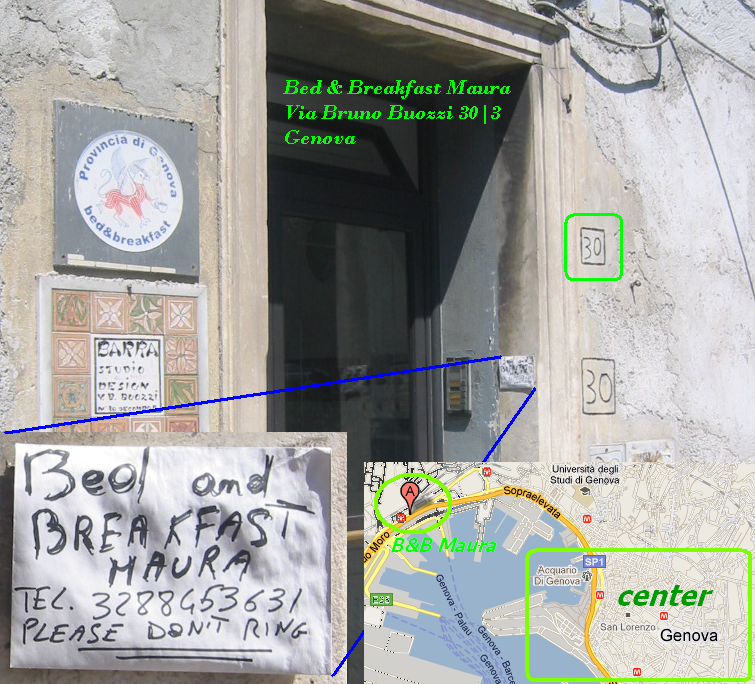 And just when you think there is nothing can beat the excitement of the highest mountains in Europe, you proceed to the road ahead.

Next day, Sunday, August 22, we decided to bypass Turin and go directly to Genova.  We typed in an address of Red House Hostel (Via B.Buozzi, 26/9) in Genova and jumped on a highway.

We easily found parking right on Via Bruno Buozzi, but we were a little confused what to do next.  There were no official sign or reception of any kind.  Instead, we found a small paper note for “Bed and Breakfast Maura“. It was just a 3-room apartment on the third floor, and you need to be buzzed in to enter.

We were greeted by a man, who said that they are completely booked, by let us in anyway.  He let us to use the Internet to search possible nearby accommodations.  He explained all our options, told us, where to eat and what to see, where to park the car and what to do outside Genova.  He spent with us probably half a hour.

Meanwhile, he rearranges some things, and one room became available for us. We paid 50€ cash, and promised to leave remaining 4€ in the room, when leaving tomorrow.  Now we have the entire day ahead to explorer the city of Genova.

All you need to remember about Genova is that it is a large functioning port, it is a birth place of Christopher Columbus (1451) and it is also a birth place on Nicolo Paganini (1782).  It is easy to find a six century old house of Columbus.  It is on all the tourist guides.  But try to find a birth place of Paganini, and wouldn’t find anything.  Even locals do not know, where it is.  It is almost lost in the folds of time.  But not quite.  We found it.

First, we did a traditional Port and downtown walk.  We ordered a traditional pesto with pasta.  We rested in a shadow of Via Garibaldi’s museums. We make our feet wet in the fountain of the central Piazza De Ferrari.  We took endless pictures of the 600 year-old Columbus house.  And now we started to ask around about some scraps on Paganini memory.

200 years anniversary of Paganini (1982) didn’t leave a big mark.  He was forgotten.  Finally, a few weeks after 500 anniversary of Columbus discovery of America, a plaque for Paganini was installed in the Giardini Baltimora.  I can’t find any information on what the original plaque from the original house was doing for these 20 years, and how citizens of Genova extracted this stone from the ruins.  Nevertheless, today we can see both – the old one and the new one side by side in very picturesque setting. 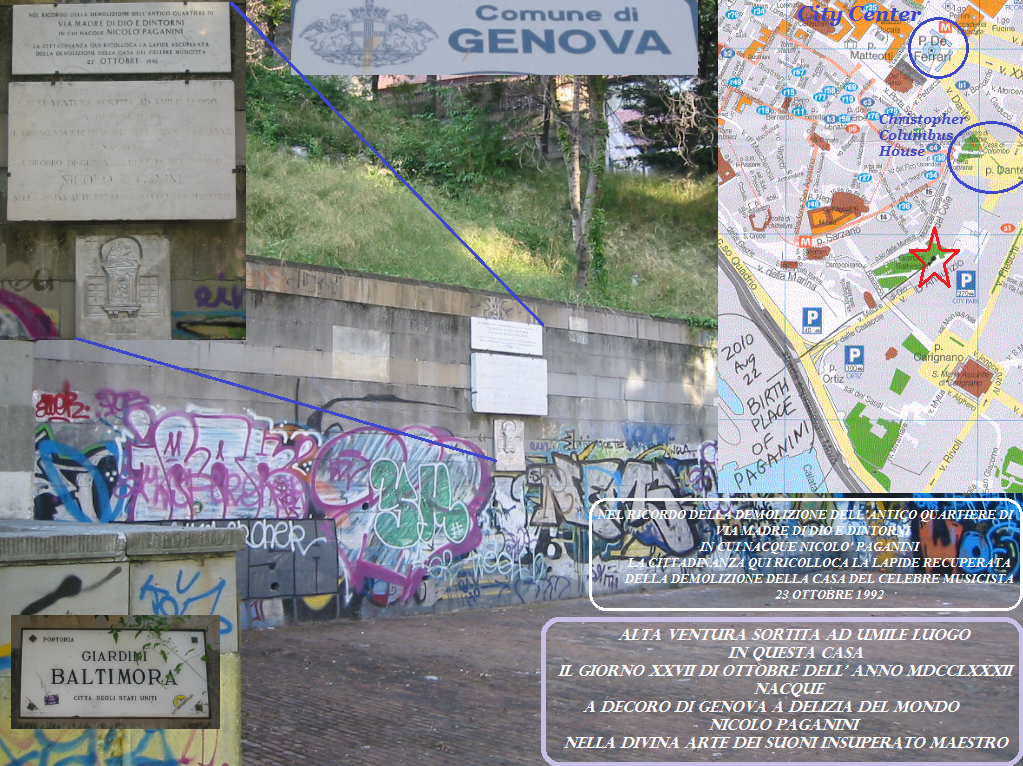 On the picture above you can see a graffiti covered nook in the park with 2 tablets.  We didn’t see this location mentioned in any tourist guide books. It is even possible that Paganini himself would have liked to be remembered that way.  It is very unassuming, but totally wild.  It is wild just like his music.

On the picture I am also showing the location of the place relative to other important landmarks.  That visit was a total highlight of our visit to Genova.  We will remember it for a long time.

Second plaque is visibly older, but do not have any date of installation. I like the text here so much so I’ve translated it both into English and Russian:

The second plate (the upper one) is much whiter and has a date:

We returned back into an empty apartment.  Windows and shatters opened wide into a sea port.  A/C was almost not required (+26°C).  Eventually other two bedrooms received their occupants.  Two 18-year old Brit girls took one, and 3 Russians took the other. We used Internet consecutively.  We used bathroom and shower in each others turn.  We used kitchen to get some tea.  So, one hot resort B&B occupants meshed together on the third floor of the Genova apartment building.  I would definitely recommend this arrangement to a future generation of travelers.