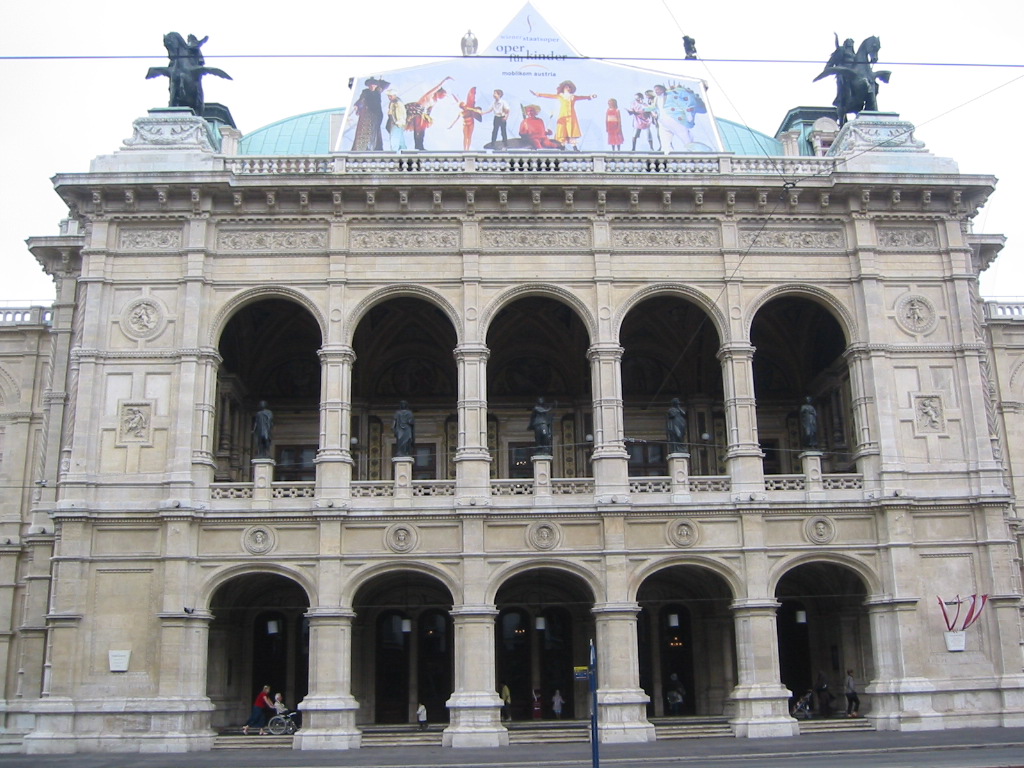 Next day – Saturday, August 16 – we jumped out of bed at 9:30 and barely made it to the breakfast.  We both took breakfast very seriously this time – the most important meal of the day, if you are planning to spent the rest of the day on your feet.

According to Lira’s plan of action we immediately discovered Café Sperl nearby (Gumpendorferstraße 11) and made a mental note to visit it in the evening.  We retraced our steps to Naschmarkt and discovered an exiting and sparkling life, tons of people of both sexes, and even more fruits, meats and beverages.  Today everything was brand new, money was exchanging hands with enormous speed and we could not believe our eyes what a difference several hours made to yesterday’s run-down strip of land.

We bought a bottle of “atomic” Cranberry juice for Lira (7.24€) and turned towards downtown.  First target – Theater an der Wien – theater, where Beethoven staged his first and only opera Fidelio.

Our next stop was Secession House.  It looks like a small squire building with a chocolate candy in a golden wrapper.  It was built in protest to traditions around turn of XX century.  One good thing inside is a free restroom.

Once again our path crossed the Opera house.  We bought fresh-squeezed orange juice in supermarket BILLA.  We discovered a few Mozart-related houses, where he lived, where he wrote The Marriage of Figaro, site of the house, where he died December 5, 1791.

It was getting late and we decided to skip Strauss place.  To save time we bought a plate of boiled potatoes and sausages with beer from street vendors (9.50€).  And we rushed to Beethoven apartment – Pasqualatihaus near Vienna University.  For 2€ we admit Lira to browse half-empty rooms and take some pictures from the windows of the 5-th floor apartment.

Next stop was Freud apartment at Berggasse19.  Here we paid 14€ for two and at this point we only have 40 minutes left before closing.  Freud occupied 2 apartments on second floor and one entrance was for patients and students and the other for family members.  The entrance hall to the office is the only remaining authentic space.  The rest of the rooms in both apartments are either restored (like waiting room) or just filled with mementos and documents, but has little to do with his life here in Vienna.

He was born in 1855 in a small town currently located in Check Republic.  He was so famous that in his 81 years in 1938, when he had to move out of occupied territory, he was invited to sped time with top politicians of France and royalties of England.  He died in September 23 1939 in London.

We ran through the entire city to Wien Westbahnhof to find our options to travel to Salzburg. It turns out that Second class tickets for a 3 hour ride cost 40€ per person.

From railroad station we almost ran to the house, where composer Franz Josef Haydn lived and died on May 31, 1809.  We made some ritual pictures in front of the memorial sign, but it was getting pretty dark at this point.

Next and last stop for the day was above-mentioned Café Sperl to have some supper.  Here we met a waitress Anna, who ordered for us fried potatoes with mushrooms and we even left a slightly elevated tips to show out appreciation.

Back in our room, Lira drunk some wine (from babushka-hostess), I sipped mineral water, and we watched 100 meter runs for both men and women in China Olympics.