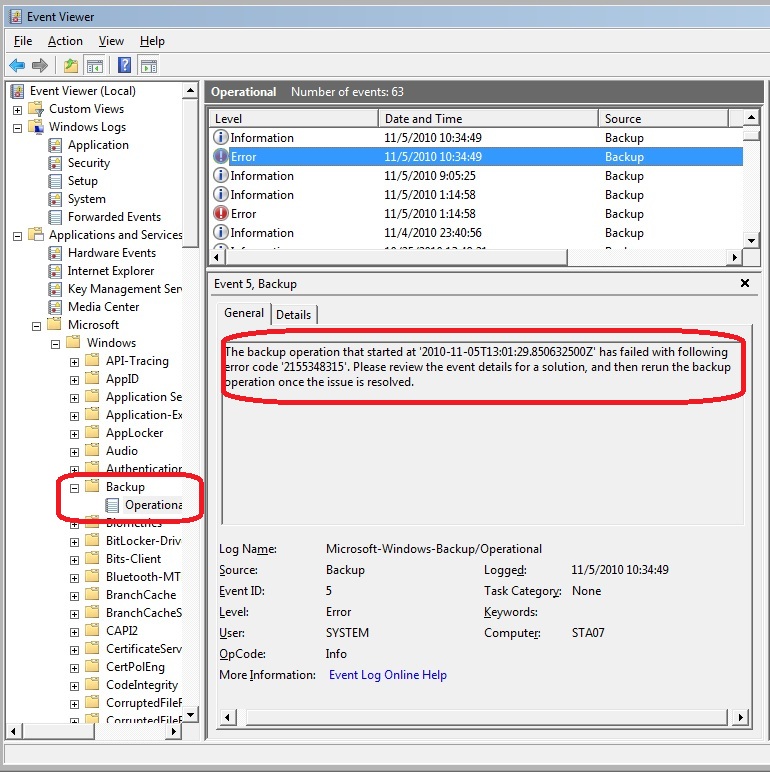 If you are getting this error during Backup in Windows 7 64-bit:

I was using Windows 7 backup for several month without a single error.  Then, I switched my desktop to a Wi-Fi connection (instead of a wired one), and sure enough, I started getting these errors.

The link between these two event wasn’t obvious at first.  Backup only runs once a week, and you need some time to notice that something is wrong with you backups.  So couple of weeks later I start receiving reminders from System Action Center to run a complete system backup.  That is new.  What’s wrong?  By that time I forgot to thing about Wi-Fi switch as something new, or recent.

So, my first scare was a virus.  I started deleting those obnoxious EXE(s) from multiple Registry Run location.  Found a couple of very interesting ones.  As a side note, I discovered that 64-bit system has more places to insert programs to run on Start-up. But all this didn’t resolve the issue.  Then I got to the actual backup error that you can see in Event Viewer – Application and Services – Microsoft – Windows – Backup (see picture).

At this point I realize that this error – 2155348315 – happens at various intervals from the begging of the backup, and there is no more details available from the error itself.

So I spent some time researching the issue, but all the answers were vague and uncertain.  Then, as a chance has it, I just run a really long network wire from the router and tested and retested the backup.  All the errors are gone.  Now I am convinced that the cause of that error is a slight hiccup somewhere between PC and the router during long minutes and hours that backup takes.

I noticed that my Contact Form 7 started to fail tests without a slightest provocation. This article describes simple steps how to make it work reliable again.   Purpose Reliably receive messages generated by Contact Form 7 from any address.   Problem Many SMTP providers further restricted message relay policies.  […]

Histiry of This Site – DomainWebCenter.com

Welcome! This is not a typical article for reading. This is a log of important events in site development and growth.   2017 Oct 12 Thu First attempt was made today to transition to a new stable server with PHP7, latest MySQL, latest WP version and a brand-new theme. This […]